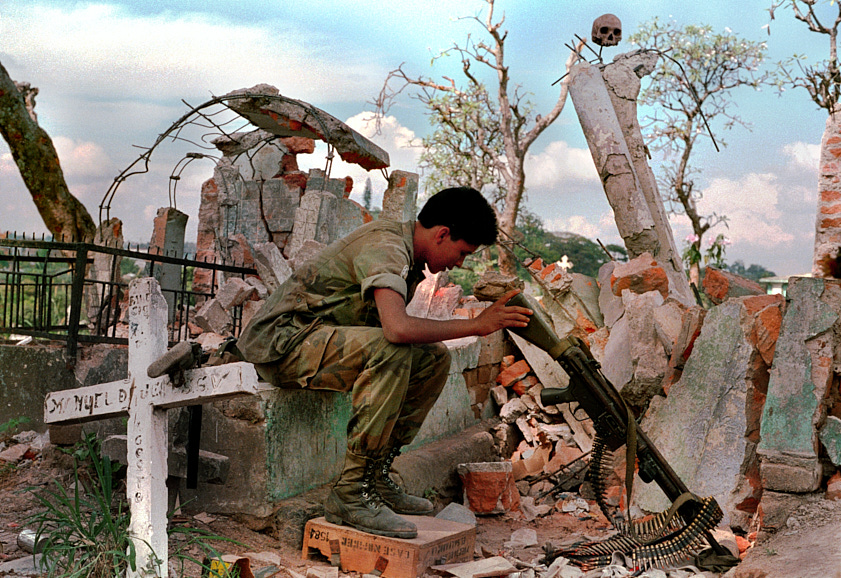 I shot the images in this archive sequence between 1989 and 2010 while covering news stories worldwide. Some have been widely published but many have never appeared in print. Most of them are more than 20 years old. As Edward Abbey wrote, “Nothing could be … deader than yesterday’s newspaper” – So is there any point in looking at them after all these years?

Journalist Eric Pooley lamented in 1989 that thoughtful reporting was often buried by sensational stories because “If it bleeds, it leads.” My early photos often depicted conflict and were sometimes bloody. Should their violence disqualify them?

The first photo in the sequence shows a Salvadoran soldier sitting on a tomb in a devastated graveyard, leaning forward thoughtfully on his heavy machine gun, with a skull on a broken pillar in the background. There is a gentle evening light and a delicate turquoise sky with fluffy clouds. The editor at the news agency where I was working rejected the image because he said it lacked movement. For me its paradoxical tranquility is what it makes it unusual because of the chaos and horror of the scene. Besides, movement happens in our heads as well as outside us. Perhaps the soldier was wondering just how he could have ended up there, in which case there was plenty of movement in his mind — and the photo creates plenty in mine too.

I used to believe in the value of news on the basis that we need to know what is happening in the world to be able to change it. War photographers have a habit of saying that they expose what is horrific to prevent it happening again. The trouble is that as the years have passed, nothing seems to have changed. Most conflicts are as stupid and violent today as they were when I started photography — and for hundreds of years before that. Exposing horror to stop it is a less cynical rationale for war photography than running after blood because it leads, but I suspect it is a parallel illusion much of the time.

A particular problem with war photography is that instead of raising awareness, violent images can blunt it. Pictures that bleed may arrest the eye for a moment but if that is all they do, people will turn the page. Repeated images of violence can make it so familiar that it starts to seem normal, or even dull — regrettable but apparently inevitable, something that might as well be ignored. So much for war photos that prevent wars.

Photos of victims of conflict can also be double-edged. Sometimes they provide vital evidence of conflicts that governments pretend do not exist and would like to erase from history. But frequently they depend on a reflex obligation people feel to show respect and admiration for the subject even when the compositions are weak and the emotions predictable. Also, too often images of this kind do nothing to show who is responsible for the victims’ misery, so supporters of one side can simply blame the other.

Just occasionally, photos are striking and timely enough to provoke a widespread reaction and motivate action. This happened with a photo I shot in August 1999 for Time magazine of a girl in Sierra Leone whose hands had been cut off by rebels. A wave of other press coverage followed, and she and other victims were brought to the United States to give evidence to the US House Subcommittee on Africa. But the outcry eventually subsided, and although the political landscape changed in Sierra Leone, comparable violence continues to be perpetrated in neighboring Nigeria by the Boco Haram terrorist group.

On the other hand, I think some photos can have a powerful effect on the minds of individuals in a way that is less public and less obvious but no less significant. Images of this kind generally have more layers of meaning, more resonance and more emotional nuance. My photo of the girl in Sierra Leone that appeared in Time was a head and shoulders portrait with her mutilated arms on either side of her head, and it was certainly impactful. But the shot I have included in this sequence shows the context of her life and of the cruelty done to her. She is with two sisters in the yard behind the family’s house. Their poverty suggests she was a random victim; their expressions show no anger, as if such violence was to be expected in their world; and her missing hands are all the more disturbing because they are not the first thing you notice.

For me, pictures have longevity because they show or say something I have not seen or thought about before. Instead of affirming what we believe, images that last need to question it; they need to dismantle stereotypes instead of repeating them; rather than presenting a simplified, instantly comprehensible idea of the what is real, they should show how complex and contradictory the reality tends to be. And they need to transcend news and blood to capture something that expands our notion of what is possible. Unless we keep extending our imaginative horizons, I belthey will become smaller, meaner, less tolerant and less inclusive — and our minds will become less fertile and less capable of empathy.

For this sequence, one of my principles was choose pictures that were unlike any I had seen before from a similar situation. One shows two children in corn field with plumes of flame nearby. There is no message, but the image raises questions and contrasts that makes it unfamiliar and intriguing. The children are almost dancing, excited and delighted, but may be in danger. How did the fire begin? In a moment, will the field be an expanse of charred, smoking stubble? I don’t know what this image means, if it means anything, but I haven’t shot or seen another like it, so it adds something to a world where many photos just duplicate others.

The arrangement of the images in this sequence is important as well because it adds another imaginative dimension. Each image means something more than itself because of the frames before and after it. The opening of the sequence mixes portraits victims of war with those of young, traumatized fighters, and of the people whose rigid ideology has sent them to war. The end of the sequence draws together images ranging from destitution and disease to decoration and ritual that are by turns comic, innocent, and exuberant.

The sequence is roughly chronological, although I sometimes mixed different times and places when it made thematic sense. I can identify changes in my way of seeing things as the years went by. Early on, trying to grasp what I conceived to be reality, I found the simplest path to it was through photos of trauma, suffering and extreme emotion. As I began to have reservations about that kind of imagery, I looked for ways to capture more subtle feelings or create visually provocative compositions with less anecdotal clarity. As a result, the later photos tend to be more complex, bringing together several planes of action, shapes, and colors in a dynamic balance that existed for only an instant, never before or afterwards.

In 2013 I decided to move from shooting news stories to producing books, but I continued to be haunted by the earlier photos I had shot. This sequence is how I tried to make sense of them. In the future I hope to convert it into an exhibition or a book, but for now it only exists here. If you would like a print, please get in touch via the contact page.